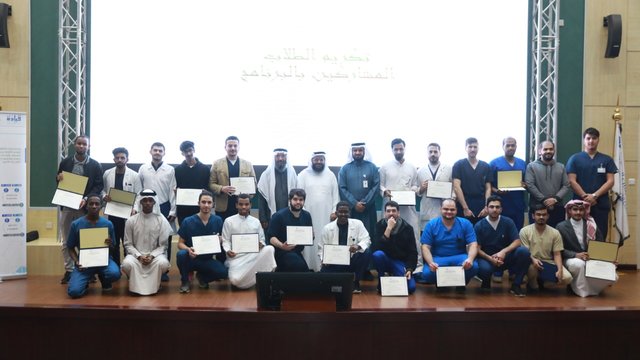 ” High-potential Leaders Program (HLP) ended phase one with 46 leaders The Student Affairs organized the closing ceremony for HLP with the presence of the Chief Supervisor of the colleges, Prof. Dr. Abdul Rahman bin Muhammad Al-Mazrou and the General supervisor of the Center for Leadership Studies Dr. Saleh Al-Muhaimid and a number of colleges leaders. Among the most prominent achievements of the first phase of the High-potential Leaders Program (HLP) project, which included training 46 leaders, they implemented their projects on teams of more than 220 male and female students in the colleges and applied various programs that included courses and workshops with a total of 7242 minutes. The Chief Supervisor of colleges praised Prof. Dr. Abdul Rahman bin Mohammed Al-Mazrou by the achievements of the program, which is considered one of the specific programs that the colleges establish to prepare qualified leaders and achieve the mission of the colleges. The General Supervisor of the Center for Leadership Studies, Dr. Saleh Al-Muhaimid, referred to the goals and vision of the program and clarified the mission of the Center for Leadership Studies, which is the supporting body for developing students’ leadership abilities through the high-potential leaders program. The attendees listened to models presented by the leader Nader Al-Hadithi, Muhammad Sharabat, Abdul Rahman Farhat and Ibrahim Al-Tarifi, and other models of the female students’ section presented by the leader Heba Ramadan, Asma Badakhen, Maha Saad Zain Al-Abideen and Ghada Qassem. Examples of the projects presented include a program implemented for middle school students entitled Lung Cancer Awareness, Biology Course Review for Preparatory Year Students, Reading Club, Specialization Path to Britain, Associated Hearts, Community Education on the occasion of the International Month for Lung Cancer Awareness, Stronger than Lobster, Audiobook, the seven habits of the most effective people. The ceremony concluded with distributing certificates to the participants and those who passed the first stage of the project of qualifying leaders from male and female leaders. ”